My Modeling Debut with a Model Mom
by Jon Weisman 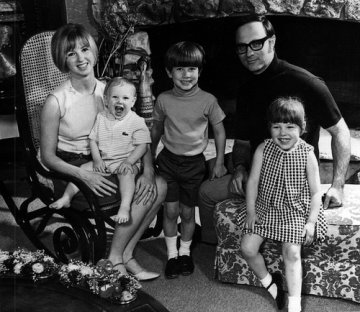 The picture above was taken at our old house in Encino in 1969. I'm the happy little lad on the left on my mother's knees. At some point, I'm told, the photo was sent to Redbook magazine, which was planning a beauty makeover story. My mom was one of three women selected as subjects. 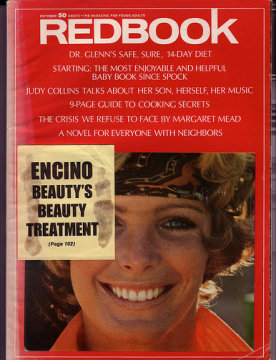 Here's the cover of the October 1969 issue. Newsstands where we lived added a special post-it like tag on top with the artfully written phrase, "Encino Beauty's Beauty Treatment." 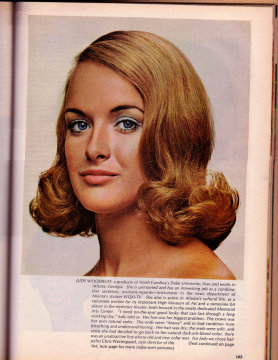 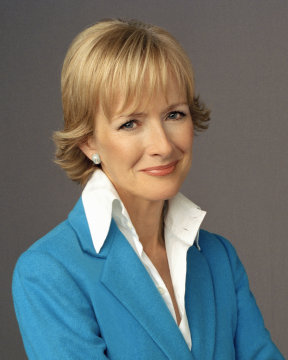 Also selected to participate was an Atlanta woman who had "an interesting job as a combination secretary, assistant-reporter-interviewer in the news department of Atlanta's station WQXI-TV" named Judy Woodruff. Perhaps you saw her on TV sometime. (NBC, CNN, PBS - do they ring a bell?) You can read more about Judy's beauty goals by clicking her first picture above. 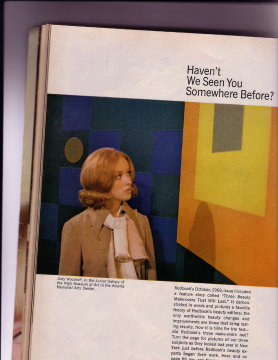 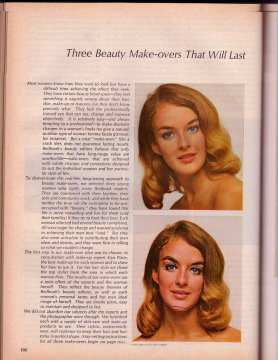 In these next pictures above, you can click to learn more about the detailed approach by Redbook to the project (as well as see how one's skills in defacing high school yearbooks might have come in handy in the fashion world).

"To demonstrate this real-life, long-lasting approach to beauty make-overs, we selected three young women who typify many Redbook readers. They are concerned with their families, their jobs and community work, and while they have neither the time nor the inclination to be preoccupied with 'beauty,' they have found that life is more rewarding and fun for them (and their families) if they try to look their best."

Ain't that the truth.

Interestingly (to me), Judy and my mom shared an interest in art. My mom majored in art at UCLA, taught it at Canoga Park High School in the early 1960s and has been a docent at the Los Angeles County Museum of Art for nearly 30 years. 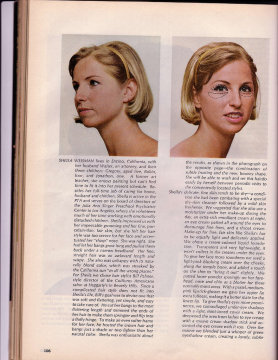 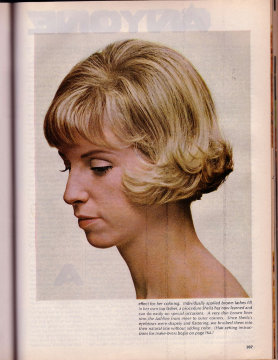 "Sheila impressed us with her impeccable grooming and her fine, porcelain-thin, fair skin, but she felt her hair style was too severe for her face and accentuated her 'sharp' nose. She was right."

Sheesh - kinda blunt, huh? I think she looks great as is! But the biggest slight was that the long-awaited first mention of me in a national publication butchered my name, adding five extraneous letters. Who is this "Jonathon?" 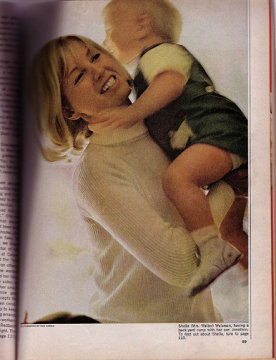 You didn't know I was a model, did ya? I think I look pretty sharp. Of course, I lost my looks when I got older, but I was quite the catch back then... 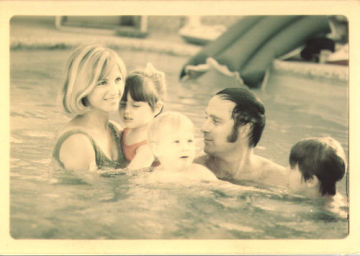 This is a post-makeover photo that wasn't used in the magazine, featuring my mom (who was never one for going in the pool), my sister, me, my dad, my dad's sideburns and my brother. 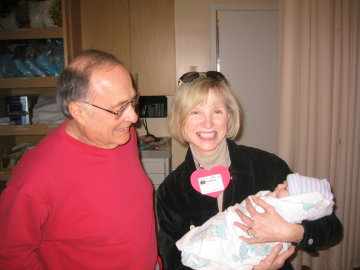 Well, it's 2008, and the Encino Beauty is now an L.A. Grandma, five times over. Redbook is a distant memory, but I think her smile says it all. Happy almost birthday, Mom.
(Thanks to my sister Robyn for scanning everything.)

2.   Eric Stephen
That's a pretty classic laugh/smile by a young Philosopher King in the first picture!

3.   Bob Timmermann
For a while there, I thought Jon was the son of Al Hunt.

4.   Indiana Jon
I've spent my whole life having people try to add those same five letters. Will they ever understand?

"Sheila's beauty secret involves drinking a quart of olive oil in a day."

7.   Andrew Shimmin
Creeps me out when they draw on the faces.

8.   dzzrtRatt
Hilarious. Happy birthday, mother of Jon. Without you, Dodger Thoughts would not exist. And I would not know Andrew Shimmin's hopes and fears.

The article reminds me somewhat of the TLC show, "What Not to Wear." If I really want to be nice to my wife, I will stay in the bedroom with her while she watches this show, which takes women who dress funny and have bad haircuts, and show how you can turn them into beauties by making fun of them.

9.   Rich Lederer
Nice photos, Jon. The first and last are the cycle of life. Always fun to learn about your background and family. Thanks.

For $5,000 worth of free clothes and a makeover, they can make fun of me all they want

15.   El Lay Dave
Fantastic! Thanks for the blast from the past and for triggering my flashback. My mother subscribed to Redbook at that time, so that issue probably graced our living room, a room that also featured a rock-faced fireplace and printed-fabric furniture, and that also saw photos taken of a sensibly-styled mom, a hairy-armed dad with overly prominent sideburns, and three apparently energetic young children - we were 8, 6 (also a Jon) and 2 most of 1969.

What's funny to me about your name being butchered is that the -on ending is less common than the -an. My brother is a JonathAn, and to this day he emphasizes that 'A' strongly when spelling out his name.

16.   El Lay Dave
14 Clinton and Stacy should come to the DT picnic and advise all of us!

18.   scareduck
I should also say this is pretty cool. My mother-in-law had a modeling portfolio in her 30's because she started graying very young, so she did ads where they wanted young-looking older people, as for retirement communities and the like.