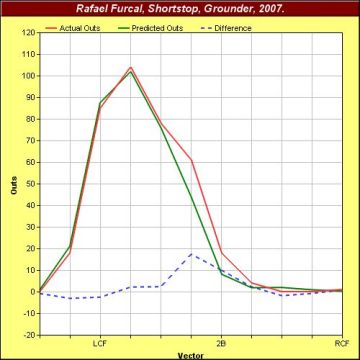 Defensive charts on every major leaguer - and that includes the Dodgers! - for the 2007 season have been posted by David Pinto of Baseball Musings.

The horizontal illustrates a slice of the field - in the example here, from just inside third base to the right side of second base for Rafael Furcal. The vertical gives you the difference between actual outs and predicted outs. So in Furcal's case, his biggest strength is just to the left of second base, although more grounders come to the left of that spot.

It's a lot to digest, but have at it.

Comments
1.   Suffering Bruin
That looks like the graph of my broadcasting career. :)

Seriously, it looks good. Is it?

2.   Greg Brock
I only accept charts in pie-form.

1 How are your classes? Everything good, I hope.

3.   Marty
Sure, you teachers are cozy like lice. I bet you have a secret handshake and signal too.

4.   Daniel Zappala
I don't see much difference between GMJ and JP. Previously some here have argued that JP is a better defensive CFer, perhaps to make up for his much worse bat, but these charts at least don't bear that out.

5.   Greg Brock
3 Teachers don't shake hands. Between the germs from the kids and dry-erase markers all over our hands (or overhead marker), hands are a mess.

That germ killin' gel stuff is a godsend.

6.   Daniel Zappala
I always use steganography to communicate secretly with other professors.

7.   regfairfield
4 This is the first advanced metric I've seen that puts GMJ at anything resembling average.

8.   Brent is a Dodger Fan
This seems to only reflect range for outfielders, and would not do anything to explain arm (or lack thereof)...

Not useful information on catchers...

Found Kent to be surprisingly close to "expected"...

Showed Andru Jones' range to be good, but not incredible.

9.   Jon Weisman
No, throwing arms are not a part of this.

10.   underdog
Could Rafael Furcal's chart above also be used to demonstrate the American real estate market over the past ten years...?

11.   Eric Enders
At first glance it seems to support what we've observed about Pierre, namely that he is good at getting to balls in the gaps but can't field the ones hit right at him.

12.   bosc1966
The vector also apparently demonstrates Brent's ability to write in complete sentences over the course of a working day.

13.   still bevens
I cant figure out these catcher graphs to save my life.

14.   Gen3Blue
This shows that Kent actually has more range than expected. Not sure I can square this with observation.

17.   Andrew Shimmin
16- So, how's your buyer's remorse coming? Have you gotten four hundred dollars worth of joy out of having a marginally different operating system, yet?

18.   Greg Brock
17 So far, so good. It does, however, take a long time to learn how to do the "easy" things that make macs so cool. Installing programs is so easy that I still can't do it properly all the time. Drag this disk looking thing into the applications folder, and so on. I do find myself missing the BSOD. It was comforting, in its own way.

It's a white computer, and that's going to be a problem. I drag this thing to work and back, and it's not going to be pretty in a year or two. And pretty is half the reason to buy a mac, right?

I do feel pretty hip, though. Plus, my new glasses have thick rims, so I'm even hipper.

19.   jasonungar07
Be easy on me I put this together pretty quickly...feel free to check it out...A video of pics set to music of my son Benjamin.

22.   Daniel Zappala
15 Bah. Why would I want to turn my Linux machine back into a Windows box? I'll stick with Gnome, thanks.

Or maybe they're really impressive, and I'm just missing something.

24.   Sushirabbit
Greg, just wait till Apple determines for you that your notebook is too old and sends out updates that destroys it and forces you to buy a new one (or, for people that can actually do something, wipe the HD and re-install). I have to say that as I've gotten older and lazier Ubuntu looks better and better.

25.   regfairfield
24 Unless you want to do things like use wireless Internet.

27.   Sushirabbit
Yeah, but I really never use wireless. I always think that I will and I do sometimes, but mostly not. In fact, after I sold my Pismo, I've not used a laptop unless absolutely necessary. I just can't stand the keyboard/trackpad. Yes, I'm an old dog.

Pierre's graph doesn't look much different than Laroche's. I guess small sample size comes into play there. After looking at a few of these, how is "predicted outs" determined?

28.   Andrew Shimmin
22- Gnome is the desktop environment I would use during Lent, if I were a Catholic.

29.   regfairfield
26 Kent was still one of the worst second basemen overall.

One of??? Who the hell was worse?? I'm just saying I thought his chart wasn't as bad as what I expected.

32.   regfairfield
Off the top of my head, almost every metric agrees that Uggla is by far the worst in baseball (this one only has him at really bad), but the only surprises to me on that list below Kent are Miles and Giles. Every other guy has a huge reputation for being terrible.

33.   cargill06
32. considering the bat marcus and miles have, it's amazing that they've managed to stay in the bigs this long... well i guess marcus signed a minor league deal. Not to sure about Aaron

34.   regfairfield
33 The Cards just reupped him for around one year, one million.

35.   underdog
The article on Dodgers.com on the team's first winter mini-camp is pretty cool. Sounds like a great idea from DeJon Watson, to help make the players' transition to the majors easier, and even the transition to Spring Training easier. Now hopefully a good number of those guys will make that transition to the majors with the Dodgers. I wonder if they open any of the practices to the general public. Those of you in LA should keep your eye on it.

36.   kinbote
Can we get a chart on ant displacement via the Chinese chalk defense? (I swear by it too.)

37.   underdog
I've had my Mac PowerBook G4 for longer than I realized - four years+ - and it still works great. It is, however, looking pretty beat up. Partially because I dropped it once and bent it's, as Bender would say, shiny metal a... frame. It's one of those titanium models that look cool but get scratched up real easily and it's no surprise they don't make 'em any more. But, knock on wood, I've had no major problems with it, even after installing the newest system X, and I'm sure that will cont..... >>blip!<< ...

38.   kinbote
35 Is that really Delwyn Young in the photo? He looks slender-er.

40.   Xeifrank
David Pinto's system is interesting. Without reading the details of how his defensive methods work, I wonder if it takes into consideration defensive placement. I think a good infielder and possibly outfielder can gain something by adjusting his position on a pitch by pitch and at bat by at bat basis. I remember playing SS as a teenager, I would look at what type of pitch the pitcher was throwing and adjust my positioning a step or two accordingly (of course not early enough to tip off the type of pitch to the batter). With a right handed batter I might play a step or two towards the hole if an offspeed pitch was coming, or play straight away or a bit up the middle with a fastball or a pitch away. Until stuff like this, and the quality of infields that infielders play on are taken into consideration, I feel there is more room for improvement. I assume there is an adjustment for slow vs fast infields. Some grasses are cut higher than others, some play on artificial surfaces. I hope there is an adjustment for that, and how they would measure the height and friction of the grass on a bouncing ball, I have no idea, but good luck doing so. :)
vr, Xei

42.   Jeromy
I've always been curious how Greg Maddux wins all of the Gold Gloves. I've seen him made quick plays with his hands and he is always in good fielding position, but does he really have range??? But now with these charts you can see a noticeable difference in overall success than with other pitchers, say Derek Lowe who seems me (unintelligent as I am) to have a little trouble with grounders right at him.