Watch The Spectacular Spider-Man on Saturdays
by Jon Weisman 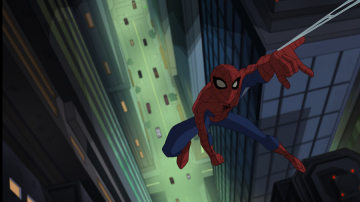 My brother Greg's latest series, The Spectacular Spider-Man, premieres with two episodes Saturday morning - in Los Angeles, they will air on the CW (Channel 5) at 10 a.m. Greg wrote the pilot and is supervising producer.

Here's some background from ComicBookResources.com:

Weisman said that when the series begins, Spider-Man will be new on the scene but not brand new. "He's been Spider-Man for about four months," Weisman said. "It's not the first time he's ever spun a web, it's not the first time he's ever stuck to a wall. He's got the basics down. But he's been fighting muggers. Things have been pretty easy. So the theme or our show is the education of Peter Parker. We are going to teach this guy some lessons, in every sense of the word." ...

Comments
1.   bhsportsguy
I'll watch it if they have the classic theme song.

Okay, I'll check it out even if they don't.

Actually, I'll have to record them and watch it later.

3.   ToyCannon
At one time I was the proud owner of the 1st SpiderMan comic book. I think I traded it for a n Iron Man comic book. Not that any of our comic books were in any investment shape after being read about 500 times.

4.   kinbote
I used to like the animation looping they practiced in the old series. I remember Spidey's swinging looked familiar after a while as did the instrument playing of a band. Come to think of it, why was there even a band anywhere on that show?

5.   haskell
I miss the Thundercats.

6.   Zak
Hi Jon. Any idea what the age appropriateness for this show is? My 3 year old loves spiderman but I won't let him watch the movie except for some selected parts of it which he loves. But overall the movie is too dark for him (in my opinion). Is this show ok for young kids? I've been reading about this show, but I didn't see any parental guidance ratings anywhere. Thanks.

7.   Penarol1916
I know my kids will watch it with me. My sons Spider-man and Dr. Octopus. One thing I've noticed in that picture and with the recent Batman cartoon is that the heros seem to be longer and much less bulky than they were when I was a kid. Is that a trend in animation?

8.   OhioBlues12
There does seem to be a trend towards more anime or manga-style cartoons, like The Batman and this new Spider-man series. I really liked the DCAU Bruce Timm animation style.

9.   Jon Weisman
6 - My brother says, "The action is pretty intense, but there's remarkably little violence, I think. No language. No sex. It's mostly just fun and a fun ride."

10.   Penarol1916
8. I'm sorry, but the three words before animation style have absolutely no meaning for me. Is that the new animation style, or an old style?

11.   OhioBlues12
10 - Sorry. DCAU = DC Animated Universe which includes the original Batman series, the Superman series, Batman Beyond, and the Justice League cartoons. Bruce Timm is the creator of said series and its revolutionary animation style.

12.   Penarol1916
11. Is that the Batman series that had the really dark background because the animation was do entirely on black paper and then light had to be drawn in? I loved the look of that show.

15.   Eric Stephen
Big matchup at Pauley tonight. If Stanford wins, they will be tied with UCLA at 14-3. Since they will have split their two games if that happens, the next tiebreaker is record versus the next highest team in the standings.

So Stanford gets the #1 seed by sweeping in LA, coupled with a USC win vs. Cal or one ASU loss.

USC could get the #3 seed with two wins and a WSU loss to Washington.

17.   MC Safety
Awesome! Although nothing can ever top Spider-Man and His Amazing Friends.

18.   cloakedarbiter
Been reading this site since 2004 and I'm going to post for the first time and break my silence for once with this ESPN page 2 article about Jeremy Brown's retirement. Another one.

In short, it's infuriating and somewhat insulting to the human population of the ignorance of some sportswriters.

19.   Dane Bramage
18 Don't take it seriously. Joke article. That author is known for those.

20.   underdog
18 Yeah, as Dane says, it's satirical. Obviously a lot of the commenters there were fooled, too.

22.   Sam DC
I'll confess that I could put my kids in their Spiderman pajamas, spread out the Spiderman Bank Heist and Spiderman/Sandman Battle Zone playsets for during commercials, bind their wounds with Spiderman bandaids, and lay out a snack of Spiderman fruit rolls and Spiderman ritz smores for this, all without doing any further shopping.

But TV is a little tough because the 7 yr old can watch but the 3 yr old hasn't really. I expect we'll work it out though. ;)